Cancer of the Tongue 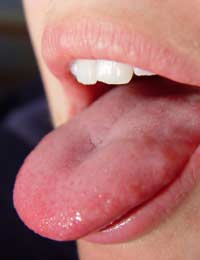 Your tongue is split into two parts; the part we see when we stick our tongue out and the base of the tongue in the throat. Cancer can develop in either area and affects everyone though smokers are at a much higher risk of developing the disease than non-smokers, for many though the cause may never be known.

The symptoms of tongue cancer can often be mistaken for other complaints in the early stages.Cancers that grow in the first part of your tongue sometimes begin as a sore spot, often white around the edges much like a common mouth ulcer. For some people the area may not be too painful and so can go unnoticed for several weeks. The spot will normally grow sometimes changing in colour and shape and often it is the dentist that first sees these changes.

Cancer at the back of the tongue can occasionally cause pain and discomfort in the throat like the type of sore throat that occurs with the common cold and so is usually mistaken for this in the first few weeks.

There is also the chance of having referred pain which means that the pain is not felt at the site of the cancer but may be felt in the neck, head or ears.

You may experience some degree of taste changes with cancer of the tongue though this does not happen to everyone.

Many people with a noticeable tumour will need to undergo surgery to remove the whole tumour or as much of it as possible. There may also be a need to remove some other parts of your mouth and occasionally the lymph glands in the neck depending on the extent of the growth and whether it is thought that it may have affected these areas.

If the tumour is thought to have invaded most of the tongue, it may be necessary to remove the whole tongue in a procedure called a glossectomy in order to achieve the greatest success in beating the disease. A way of minimising the chance of having such extensive surgery, is to receive chemotherapy first in the hope that the tumour will shrink and less tissue will have to be removed.

It is common to receive radiotherapy both before and after surgery or with chemotherapy; sometimes patients will need to have a combination of all three types of treatment to have the best chance of recovery.

If you need to have part or most of your tongue removed, there are a few things to consider during your recovery. It is likely that you will need to learn new eating and drinking skills as the actions that were previously used may not work after the surgery.

It is also probable that you may have a few problems with your speech as you learn how your 'new' mouth works and get used to the changes. Fortunately there are a lot of agencies such as speech and language therapists and counsellors who can help make this process a lot less worrying and can help you in many ways.

Tongue cancer is more common in smokers and can have a serious impact on life even if the tumour is successfully removed.