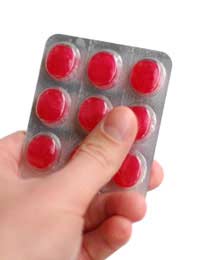 It is well accepted that the mouth and digestive tract, like the skin, are home to millions of so-called good bacteria. These are generally harmless bacteria that live in or on the body and contribute to good health by helping us fight off the more harmful pathogenic bacteria.

When someone has antibiotics, these kill bacteria indiscriminately, getting rid of the good as well as the bad. To replenish the body’s supply of helpful bacteria, eating or drinking yoghurt cultures rich in good bacteria is thought to be beneficial. The bacteria repopulate in the digestive tract and sort out problems such as diarrhoea that occurred as a side effect of the original good bacteria being killed off.

Although the theory behind this is good, and many people swear by probiotic yoghurts and drinks, there is not a great deal of hard scientific evidence that such products actually work.

In the last year or so, a new probiotic product has been advertised on the market, usually from sources in the USA. There are plenty of Internet sites offering such lozenges. The sites and the lozenge manufacturers claim that the lozenges contain millions of friendly bacteria and just by sucking them, you can ward off all potential infections caught, for example, at your child’s playgroup.

But how likely are these claims to be true? These lozenges do not seem to have been tested independently, so there is even less scientific evidence that they work. But how does the theory hold up? By considering a few basic questions, it seems unlikely that these lozenges could be responsible for the health benefits that are being claimed.

The adverts for probiotic throat lozenges claim they have millions of good bacteria that help the mouth, throat and digestive system as you suck them after meals. When you look closely at the claims, you will find that the blurb admits that the number of live bacteria in each lozenge is ‘at the point of manufacture’.

This could mean that the bacteria were live when they were mixed into the raw ingredients for the lozenge but presumably the lozenge was then baked or set using chemicals to become a hard, suckable sweet-like product. Who is to say whether the actual lozenge, once it has been stored in a health food shop for several weeks or months, will have any bacteria at all when it is purchased and used?

Could Live Bacteria from Lozenges be Useful?

One of the problems with introducing bacteria into the digestive system is that they need to get to the small intestine and large intestine to do any good. Few bacteria live in the stomach, and there is so much strong acid there, that bacteria you eat are normally wiped out. This protective mechanism can be overwhelmed, which is why people get food poisoning and why probiotic yoghurts do seem to be able to get bacteria beyond the stomach. When the dose of bacteria is large enough - millions and millions of bacteria – some do get through.

The manufacturers recommend that lozenges are sucked after a meal, which would help more of the bacteria to get through as the stomach acid would be diluted by the recently eaten meal. However, whether there are sufficiently high numbers (or any) bacteria in the lozenge to contribute to the bacterial content of the intestine is not really known.

Probiotic Effects on the Mouth

Although, again, there is no scientific evidence that this is the case, if bacteria were still living in the lozenge when it was sucked, they would be more likely to have a positive effect in the mouth itself. Gum disease and tooth decay are common problems that are caused by bacteria, primarily Streptococcus mutans, introducing friendly bacteria that could compete with the bugs that cause problems might help cut down tooth decay. They could also work in the throat to provide competition against some of the pathogenic bacteria that cause sore throats.

So, Do Probiotic Throat Lozenges Work?

The simple answer is that we can’t know for sure, but some of the claims seem rather over the top. The best way to keep your digestive system healthy is to eat a good diet in fresh fruit and vegetables, which are high in fibre, perhaps with natural yoghurt if you like it.

Can You Still Get Quinsy?

What Are Throat Polyps?

Mononucleosis Infection and the Throat

Thrush and the Throat