Home > Lifestyle & Your Throat. > Can Shouting Damage the Vocal Cords? 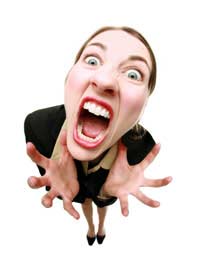 Yes, shouting and any activity that is considered to be misuse of the vocal cords can damage the voice and lead to problems with the vocal cords. Vocal cord damage happens commonly in children, who may use bouts of screaming to get their own way, but it can also occur in people who use their voice a lot in their work. Singers, actors, teachers, court lawyers, cheerleaders and sports coaches are all susceptible to vocal cord damage.

What Do Vocal Cords Do?

The vocal cords are the parts of the throat that enable us to make the noises of speech and also non-speech noises such as screaming, wailing or grunting. The vocal cords are more like folds in the tiny muscles within the voice box, also called the larynx. In men, the vocal cords are longer than in women, so give a deeper tone and pitch to the voice. At rest, the muscles that form the vocal cords are separated but when we are speaking, singing or screaming, they are drawn closer together and the air passing through them causes them to vibrate, forming sound.

What Effect Does Voice Misuse Have?

In the short term, a brief spell of misusing the voice, such as shouting at a football match, will cause local inflammation in the muscles that make up the vocal cords. This will cause a sore throat and perhaps a hoarse sounding voice, but the effects are only temporary, lasting for a couple of days at the most. If someone repeatedly misuses their voice by shouting, screaming or just straining to be heard on a day to day basis, the vocal cords then suffer more long term damage and frequently develop swellings or nodules. These are commonly called throat polyps or vocal cord nodules.If someone who shouts a lot becomes generally hoarse, they may have several throat polyps but not actually realise it. Polyps on the vocal cords are also common on singers, and may interfere with the singing voice.

How Can Vocal Cord Damage be Prevented and Treated?

When the problem of voice misuse is identified, retraining is important to prevent further damage, and possibly long term damage. In children, this is more difficult, particularly if they are very young and have developed the habit of shouting and screaming. The best treatment is to rest the voice completely and encouraging a child to drink more cool water can also be helpful. In adults, resting the voice is also recommended but this may also be difficult because of work commitments. Surgery can remove vocal cord polyps that develop but new ones can form if the underlying voice misuse is not tackled.

Smoking also tends to damage the vocal cords, so adults with vocal cord damage are also encouraged to stop and to limit activities such as shouting for their team at sports events. Actors and actresses who are called on to scream for theatre plays, films and TV programs often use a vocal coach to advise them on how to produce a realistic screaming sound without causing too much damage to their vocal cords. Most vocal coaches will encourage the actor to rest the voice completely during the rest of the day and to drink milky drinks, which have a soothing effect. Like any muscles, the vocal cords also benefit from being warmed up before doing the equivalent of a 10 second sprint, so voice exercises are designed to stretch the muscles gently before the screaming scene.

Having singing lessons is a good idea if you do any sort of singing as a good teacher will show you how to sing without putting undue strain on your vocal cords.